E-scooters are popular among Norwegians

E-scooters are very popular in the Norwegian capital, Oslo, and clearly meet a need in transporting people around the city. At the same time the electric two-wheelers are dangerous to pedestrians. Regulatory measures must be established.

These are the main conclusions in a new study from the Institute of Transport Economics (TØI), which analyzes the use and effects of e-scooters in Oslo.

“E-scooters are used mainly on short trips, typically one kilometer in airline and ten minutes in duration and meet the need for those who have appointments and meetings to get to”, says chief research economist at the Institute of Transport Economics Nils Fearnley.

Together with researcher Siri Hegna Berge and research assistant Espen Johnsson Fearnley has studied and monitored the new addition to the transportation system in Oslo. 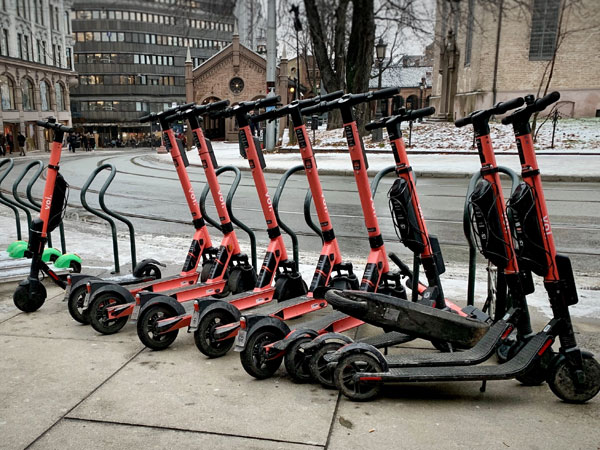 An overwhelming number of users are men under 40 on their way to / from work or school. “Last mile” trips, which is the distance from a public transportation point to a destination point and where there is no public transportation in place today, and “last minute” trips at the last minute before each full / half hour, characterize the usage pattern.

“From Oslo S and to the Barcode area and between Aker Brygge and the National Theater are typical “last mile” stretches. In those areas, e-scooter usage is very high”, Fearnley explains.

According to Nils Fearnley, both the general population and operators agree to an eminent need to regulate e-scooter parking and use. The study points to regulatory measures such as assigning specific parking areas and introducing incentives and/or fines for e-scooter users in order to make them comply with rules and regulations. 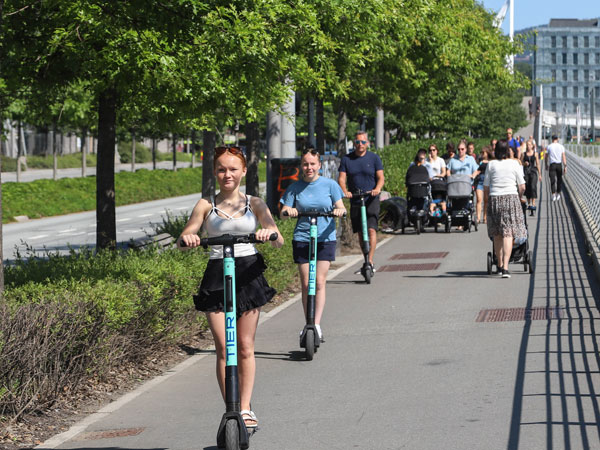 The risk of accident is an estimated ten times higher with e-scooter than bicycle. According to the study the major reason for the high accident rate is the design of the e-scooters, the street infrastructure and lack of experience.

“Most accidents involving e-scooters are one-off accidents, where the e-scooter collides with something or the rider falls off the scooter without other road users involved”, researcher Siri Hegna Berge explains.

“In our survey, users state that smooth surfaces, tram rails and holes in the road are the three main causes of accident.”

She points out that if bicycle lanes and street roads are adjusted to take on e-scooters, the pedestrians will be safer and have the sidewalks to themselves again – and e-scooterists can ride without life as an effort.

On the other hand, more than half of the electric bicycle rides take place in combination with other means of transport, specifically public transportation.

“We believe that this illustrates a potential for the public transport company Ruter to look at ways to include e-scooters in their transport system”, Nils Fearnley says, adding that he is certain that e-scooters have come to stay in some form or another.

“E-scooter is flexible, fast and fun, and takes you to where you do not come with other means of transport. In some shape or form e-scooters are here to stay”, he concludes.

This entry was posted in Vehicles and tagged e-scooters, electric two-wheelers. Bookmark the permalink.