Evolution Road – new electric road tested both inside and out

In the beginning of May, the next-generation electric road was inaugurated in the city of Lund in southern Sweden. Ground based conductive charging technology will be tested on a kilometre long stretch of electric road in the bus lane in Getingevägen. This means that the power comes from rails in the road with which the vehicles must have contact in order to charge.

The project called Evolution Road, is being led by Innovation Skåne and VTI is one of the partners.

“Evolution Road will be built using two different ways of installing the electric rails on the road,” says Mohammed Hoseini, research manager at VTI and part of the project management team.

“The first demonstration stretch consists of rails that are mounted on top of the asphalt and next year we will continue with rails that are milled down into the asphalt. Test runs on the road will be done with buses and monitoring will be made from measuring stations at the side of the road.” 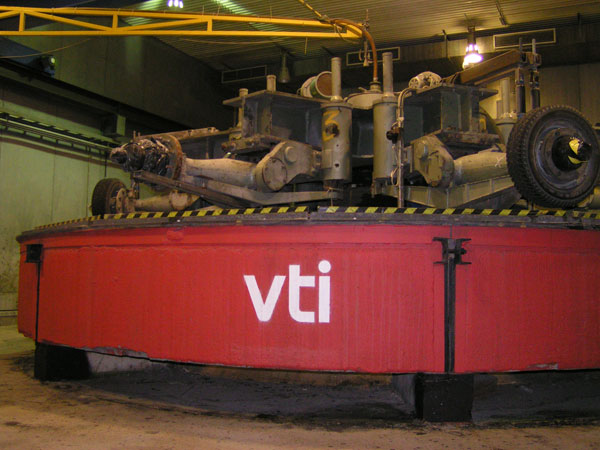 For testing the wear resistance of the rails the VTI circular road testing machine will be used. For these trials it will be equipped with studded tyres.
Photo: VTI

The rails of the electric road are tested in laboratories

There will also be tests in laboratories and VTI, as experts in road surfaces, will lead the tests on how the road and rails function both together and individually. Head of Research Björn Kalman explains about the trials:

“We are building a 15 metres long copy of the road in our road testing facility in Linköping, where we are using the two different rail fitting techniques. After the construction is complete, we will stress test the design with a so-called Heavy Vehicle Simulator, which will load the electric rails with a truck wheel that is repeatedly driven at an oblique angle across the rails. It is important that they withstand the stresses of traffic without becoming detached or suffering damage to the electronics. To find out if they survive in different weather conditions, we can also change the temperature of the test road and drive the truck wheel during both dry and wet road conditions.”

To measure the rails’ tendency to become polished, the studded tyres in the road testing machine will be replaced with tyres without studs. Researchers know from experience that tyres without studs will not wear the rails, but they can polish them so that the friction becomes too low, which can in turn have a negative effect on road safety.

“It is fun to be able to use test equipment that has been at VTI for a very long time (the road trial machine since 1943) in an innovative project like this – it is a completely new type of road we are talking about,” says Björn Kalman.

The electric road in Getingevägen will also be replicated in a driving simulator from VTI. The simulator will be in the project’s visitor centre in Lund and will give interested parties the opportunity to test drive the road by bus. Since the tests out on the road will only be done one week per month, the simulator will also be a good addition to demonstrate the project during the weeks the bus is not running.

Evolution Road started several years ago as Elväg Syd, but it is only now that the road has become real. The project is mostly financed by the Swedish Transport Administration, which wishes to gain more knowledge about electric roads in order to choose technology for longer test roads in the future.

Find out more about the projekt at www.evolutionroad.se

This entry was posted in Energy and Fuel, Infrastructure and tagged electric road, electric roads. Bookmark the permalink.