By studying the effects of expanding road capacity in two urban areas in Norway; Ålesund (the Blindheim Tunnel) and Oslo (South Corridor), researchers found that the road capacity expansion resulted in urban sprawl, longer work trips and more traffic. The rush-hour congestion was not reduced.

This is the conclusion in a scientific article published in the journal Transportation Research by researchers Aud Tennøy, Anders Tønnessen and Frants Gundersen at the Institute of Transport Economics.

“The article is based on our studies of the effects of expanded road capacity on land-use development, travel behavior, traffic volumes and congestion. In addition, we investigated whether these factors had been included in the analyzes”, says Chief Researcher Aud Tennøy. 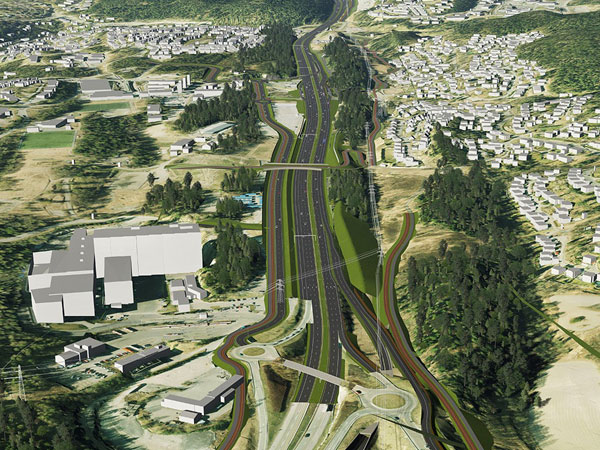 Plans for E6 south of Oslo – the Southern corridor meant to take on some of the traffic on Ring 3.
Photo: www.aaj.no

According to Tennøy, the study’s findings illustrate the fact that expanded road capacity resulted in urban sprawl and longer work trips.

“Road traffic increased and the expanded road capacity was gradually filled by cars. Soon, traffic was as slow as before the expansion and there were more drivers in the queue. Consequently, more queue”, says Tennøy.

The increase in capacity resulted in no or only short-term reduction in congestion and delays. In the South Corridor the delays were soon the same as in 2003, before the capacity was expanded.

“Our studies showed clear indications that urban sprawl was caused, or at least made possible, by the capacity expansions. Document studies and interviews revealed that before expanding the road capacity the urban development in the outer parts of Ålesund was limited because of limited road capacity. Facilitating urban development in these areas was an important argument for increasing road capacity, in which they succeeded. A side effect, however, was increased traffic and new queues.”

“In the municipalities south of Oslo expanded road capacity in the southern corridor contributed to a hike in demand for housing and jobs, and, consequently, urban development took place. The fact that car-based mobility best accessed the new urban areas, a car-dependent pattern emerged. This increased traffic, and generated more queue”, Aud Tennøy explains.

These land-use effects of expanding road capacity were not included in the impact assessments for the Southern Corridor. On the contrary, it was explicitly assumed that expanded road capacity would not lead to more land-use development in the outer areas than one could expect if the road was not expanded.

“We have examined planning documents related to ongoing capacity expansion plans and it looks like that they still do not take this into account when calculating the effects of capacity expansion”, says Tennøy.

In the article in Transportation Research the researchers claim to have documented the effects of road capacity on land use development, travel behavior and traffic volumes. This can be useful knowledge for politicians and professionals when considering whether increased road capacity is a good solution to solving traffic and environmental problems in urban areas.

“We know that the recipe for zero growth is measures such as densification and transformation in and around the city center, limiting urban sprawl in the outer areas, strengthening the city center, improving public transport, facilitating measures for cycling and walking, and introducing restrictive measures against car traffic. Our results show that it will be difficult to reach zero-growth goals if we continue expanding road capacity in urban areas. In this context it is interesting to ask why Oslo plans to expand E18 west and E6 Oslo east”,says Aud Tennøy.

The research is funded by the Research Council of Norway, project 235859: URBANEFF