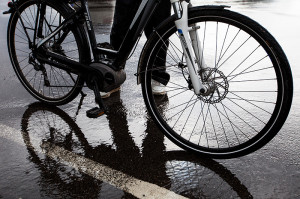 More and more cyclists are dying or sustaining severe injuries in traffic. A major EU project is studying ways of facilitating the interaction between cyclists and drivers with the help of technical aids in order to reduce the risk of accidents.

Cyclists, whose numbers have increased in recent years, account for a disproportionately large share of severe injuries and fatalities in traffic. Bicycles are not managed in the same way as other vehicles in the traffic system; for example, many traffic signals fail to register when a bicycle is approaching, as they do with other vehicles.

Project Xcycle, which involves researchers from six European countries, aims to find ways of achieving greater equality for cyclists in traffic, encouraging more cycling, and making travel by bicycle safer. The Swedish Road and National Transport Research Institute (VTI) is a major actor in the project, and is responsible for evaluating the entire concept.

“We are to develop technical solutions to warn both drivers and cyclists of potential incidents, for example, at intersections. These could be methods for displaying information both in vehicles and out in traffic, systems that work together to reduce the risk of collisions”, says VTI researcher Katja Kircher.

One technical solution that could facilitate matters and improve safety would give bicycles and heavier vehicles greater opportunity to interact safely in places where their paths cross. Another solution consists of improved traffic systems in which the traffic signals are synchronized so that cyclists can encounter all green lights on their journeys.

One work group will develop and test systems incorporating advanced sensor technology that can detect and issue warnings when cyclists are near larger vehicles. Another group will create a traffic signal system that reduces the risk of accidents. These new systems will be tested by German Braunschweig at a new testing ground designed for infrastructure and traffic research.

In the project, the researchers will also develop a demo cycle for testing technology that will be able to cooperate with other vehicles. Everything being done is focused on the user.

“We are taking behaviour into account in a big way throughout the process, for instance, by using systems that measure eye movements. We will also assess the human/machine interfaces and study the willingness to pay for various aids”, reports Kircher.

Xcycle is an EU project within the EU framework programme for research and innovation, Horisont 2020. The project began in May 2015 and its final report is due in October 2018. Nine entities from Italy, the Netherlands, Great Britain, Sweden, and Germany are participating.

This entry was posted in Safety, Vehicles and tagged cycling, xcycle. Bookmark the permalink.