From a climate perspective, rail transport in Sweden is sustainable. However, rail traffic can give rise to levels of particles that are harmful to human health. Thanks to various research projects over recent years, VTI has been able to acquire the right knowledge to help address these problems.

Inhaling particles is a particular problem in enclosed environments such as tunnels and train sheds. The particles are mainly generated by brakes, wheels, rails and pantograph systems. 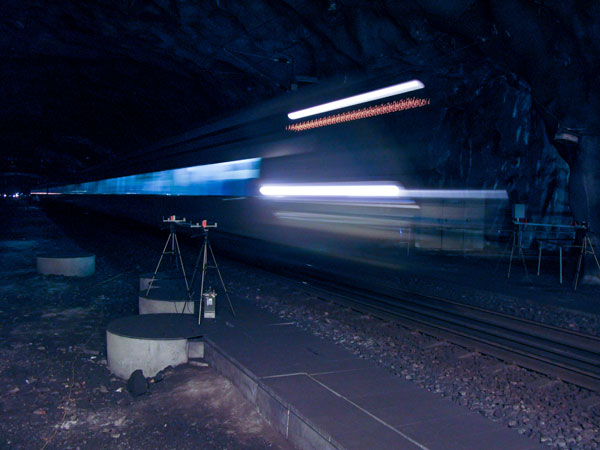 A train at Arlanda Central Station in Sweden is passing VTI’s measurement equipment that records the train’s speed front and rear, enabling braking calculations towards the platform. The braking power affects the air quality on the platform. Photo: Mats Gustafsson/VTI

“The Swedish Transport Administration are currently working to establish guidelines for acceptable particle concentrations in enclosed railway environments,” says Mats Gustafsson, senior researcher with extensive experience of researching particles generated by traffic. “While we are not directly involved with this work, we are following it and are in regular contact with the Swedish Transport Administration about the research needed in this area. Our research has taught us a lot about the properties of the particles and how to reduce emissions”.

Measurements of particles at Arlanda

VTI has collaborated with Lund University, KTH Royal Institute of Technology and SLB-analys to take measurements at Arlanda Airport’s underground railway stations. The results have shown that the concentration of inhalable particles greatly exceeds the limits set for outdoor air. Wear and tear often generates particles as trains brake as they roll into the platforms. These are then spread with the train’s movement through the enclosed space. The particles mostly consist of metals, with iron being the most common. However, high concentrations of zinc, copper and manganese have also been detected. Although these particles are relatively coarse when compared to those emitted from exhausts, they can still be inhaled.

Mats Gustafsson believes that the type of train and the composition and condition of its various components are important factors that likely affect the size of the emissions. The way a train driver operates the train can also determine emission levels by the platforms.

“Since braking generates particles, one way to protect the air quality by the platforms could be to do most of the braking before the train enters a tunnel that links with a station – rather than brake inside the tunnel,” Mats Gustafsson explains. Modern trains can also help reduce particle levels as, unlike with older trains, dynamic braking is more used, meaning drivers are less reliant on mechanical breaking that generates particle emissions. Previous measurements have shown that older trains using locomotives and carriages generate more particles than modern motor coaches.

“We would like to take another look at train stations like Arlanda to further our studies on how different trains affect particle levels, and why,” Mats Gustafsson concludes. He sees great potential for how researchers at VTI can contribute to cleaner air in railway environments.