Work with VTI’s train simulators continues to develop, largely thanks to collaboration with train operators and instructors. This year has already welcomed one new user – with many more showing interest. There is still no sign of the pandemic having affected the work with train simulators.

“We are growing, both within research and in terms of users,” says Birgitta Thorslund, senior research leader at VTI and project manager for TUFFA – a development forum for train simulator users. 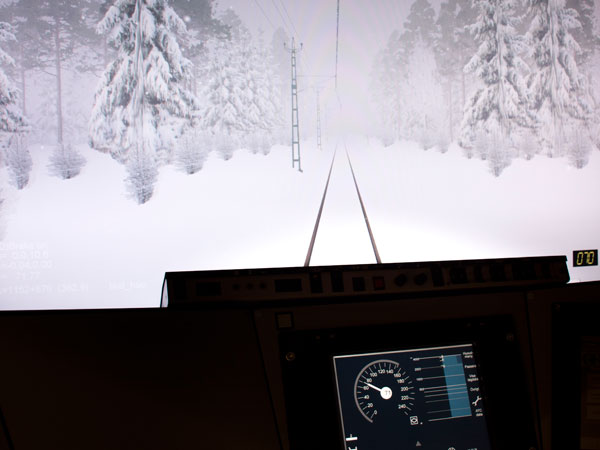 Developed together with the users

The train simulator user group started in 2016. Since then it has grown to include most of Sweden’s train operators and driver instructors. VTI has long had a train simulator used for research, but it was not until the start of the user group that the simulators began being developed together with their users. And there has been a lot of interest.

“Our simulators are high quality and have a good reputation. They generate interest from both users and other groups, such as the Swedish Transport Administration, for use with new research. This means we can be at the forefront of train operation research – all thanks to TUFFA.”

The good reputation of VTI’s train simulators has spread throughout Europe. An international collaboration is ongoing with Virtual Vehicle in Austria, who are in the early stages of establishing their train simulator research and want to learn from Sweden. The tools created in the simulator environment are also used in other EU projects such as Drive to the Future and Digilog.

The first train simulator to be developed was a large stationary model. It has now been scaled down to a portable version comprising a laptop and one or two control levers depending on whether it will be used for motor coaches or freight locomotives. However the software is the same, regardless of the size of the simulator.

“Many users need several simulators, and there were requests for a smaller, more portable version. Our laptop sim is now our best selling version, and we’ve just received another order”.

The train simulator comes in a wheeled case that is also adapted by VTI. The interior casing is designed to fit the specific model ordered.

“Many people are involved in the simulator’s development. VTI’s own workshop designs the case’s interior, meaning the simulator is well protected. A stylish VTI logo is then placed on the case’s outer shell. It all looks very professional”.

Growing interest despite the pandemic

So far, the people working with the train simulators have not noticed any effect from Covid-19. Work continues and more and more people are seeing the benefits of train simulators. Several research projects are ongoing, with many linked to the new EU-wide signalling system, ERTMS – European Rail Traffic Management System.

“Even once the new system has been implemented on the Swedish rail network, the existing one will still be in place on certain routes. The transition from the old system to the new will create an important research area in the future”.